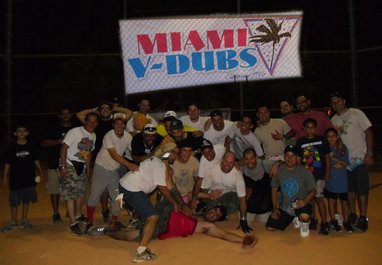 This year thanks to Rudy we had no shirts! hahaha!! Regardless, we had lingerie for the prospects! Before the games started, the prospects had to dress up and we chose 2 of them to be team captains. They actually chose very competitive teams as both teams played to a tie! Members played softball as well as others just hung out in the parking area. Families, kids and even the pets made it out to celebrate one of the funnest events we put together every year! Check out the pics here. 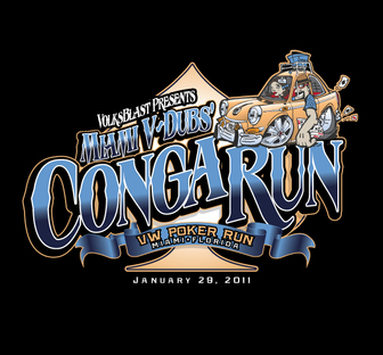 Miami V-Dubs VW Club once again hosted a Poker Run through the streets of Miami during the VolksBlast VW 2011 weekend. Due to last year's positive feedback, we went with a Poker Run again! Cash prizes were awarded to the top 3 best poker hands and the worst!! Best of all, everyone got to cruise the streets of Miami in their VW at their leisure! ALL VWs, air and water-cooled, all shapes, models, and conditions, were welcomed!

Proceeds will be donated to the “Police Officer Assistance Trust” (POAT). A local nonprofit organization that provides assistance to all law enforcement officers, who work within Miami-Dade County, and their families in times of hardship, personal crisis, or critical need. www.poat.org
For more information and comments, visit our forum thread or website.

Conga Run 2010 Pictures, check them out! 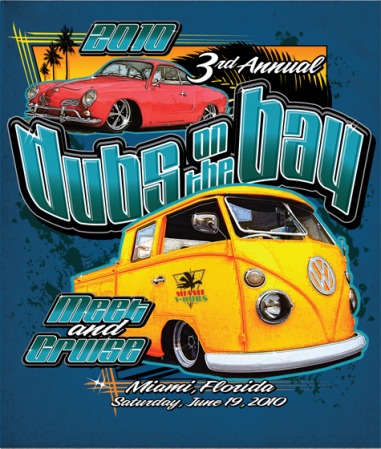 Once again, Miami V-Dubs hosted it's 3rd annual cruise "Dubs On The Bay 3" on Saturday, June 19, 2010. Started off as a casual cruise and has turned into a yearly FREE event! We met up at Tropical Park on SW 40 St (Bird Rd) like other times and cruised the streets of Miami, the Beach and eventually ended up at Mario the Baker Pizza in North Bay Village for some food and drinks. We welcomed ALL vws and had a great representation of air and water-cooled VWs! Rain held up for the event and turned out to be great sunny South Florida weather! Thanks to everyone who came out and especially those who supported the North Bay Village Fraternal Order of Police. North Bay Village Police has been supportive of DOB since day one and truly appreciate their support of our event. See you next year! 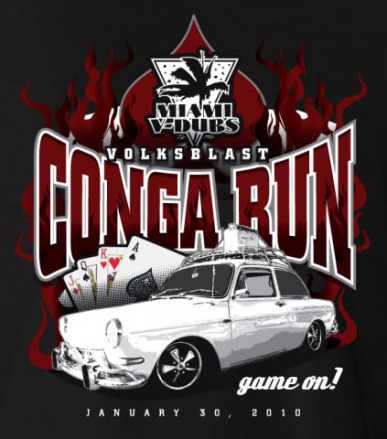 Miami V-Dubs VW Club hosted a Poker Run through the streets of Miami this year during the VolksBlast VW 2010 weekend. Last year we did a cruise, this year we turned it up a notch with a Poker Run! For those who do not know how a Poker Run works, I'll try to explain... There was a designated route and you were instructed to stop and pick up a playing card along the way at different stops. At the end, who ever had the best Poker hand, won! Cash prizes were awarded to the top 3 poker hands and the worst!! Best of all, you got to cruise the streets of Miami in your VW at your leisure! ALL VWs, air and water-cooled, all shapes, models, and conditions, participated!

Proceeds were donated to the “Police Officer Assistance Trust” (POAT). A local nonprofit organization that provides assistance to all law enforcement officers, who work within Miami-Dade County, and their families in times of hardship, personal crisis, or critical need. www.poat.org
For more information and comments, visit our forum thread or website.

Conga Run 2010 Pictures, check them out!
Proceeds from the VolksBlast Conga Run 2010 was presented to the POAT officials. Total was $2500! The "Conga" events have raised $4000 for POAT in just 2 years! On behalf of Miami V-Dubs, POAT and VolksBlast, thanks to everyone who supports this event and your participation is always appreciated!! Below Ceasar and Alex accept an appreciation award from POAT on behalf of everyone who participated in the Conga Run 2010. 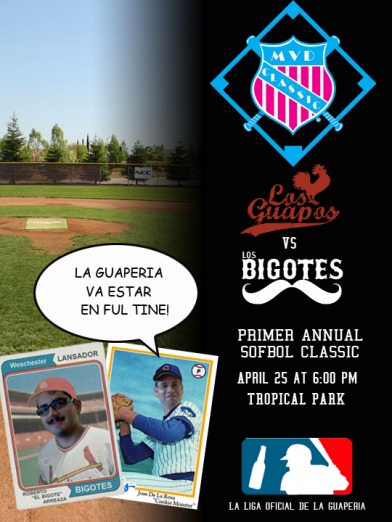 Miami V-Dubs 1st Annual Softball game. This started off as a spur of the moment softball game between members and turned into a great night. Member's families cheered on and the kids played on their own. Those that did not play in the game, brought their VWs out and parked next to the field to enjoy the night and game!

For the record...Los Bigotes had their staches handed to them twice! Los Guapos earned bragging rights 'til the next time. For more info, click on above picture. For more pics, click here. 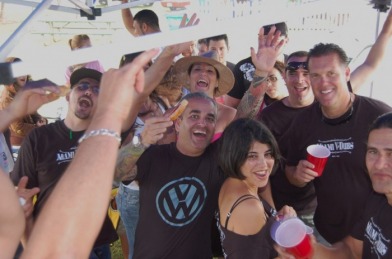 We had a "picnic" during the Show 'N Shine VW show that is held every year at Mills Pond Park. It is hosted by the Gold Coast South Florida VW Club. We were given permission to park together as a club and enjoy the festivities of the day. We had over 50 VWs register for the show! Click on the above pic for a slideshow of more pics! 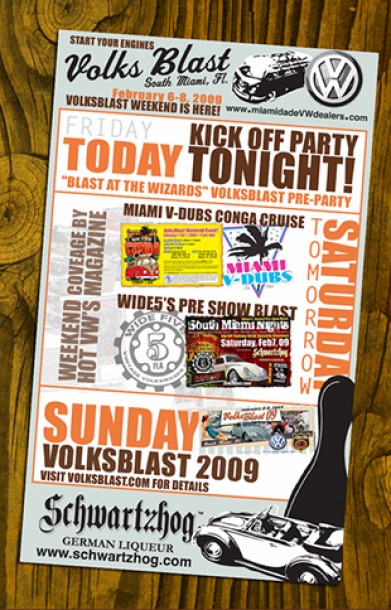 VolksBlast is in its 11th year, invited Miami V-Dubs to help out with the weekend festivities. We were asked to host a cruise on Saturday. It was our first year as a club in which we hosted an event. Some of our members had volunteered to help organize in previous years. Palmetto Bugs and Wide5 are the founding clubs of this show and we were privileged to extend our help in making this the "Greatest VW weekend in Miami"!

Friday night was "Blast at the Wizards" party held at Enrique's shop The Wizards in South Miami. All proceeds collected were donated to the 92nd Airborne of the United States Army.

Saturday had 2 events that day. First was the Miami V-Dubs "Conga Cruise" which was a cruise that had just about 100 VWs in attendance! We cruised the streets of Miami and neighboring cities, waterways and beaches. We ended up at "The Pit Bar-B-Q" house for a late lunch afterwards. We raised $1500 for the "Police Officers Assistance Trust" (POAT.org). The evening event was the Wide5 "Night On The Town" hosted by Wide5 Vintage VW Club. It was held at a historic tavern in South Miami called Bougainvillea's where accommodations were made to have the air-cooled VWs park by the bar.

Sunday was the "Miami VolksBlast VW Show" held on the public streets of Sunset Drive in South Miami. There were over 200 VWs in attendance plus a water-cooled section of its own in the bank parking lot. Miami V-Dubs had over 50 VWs registered for the show! Proceeds were given to Habitat for Humanity of Greater Miami and other local charities.

Check out the coverage VolksBlast got in the June 2009 issue of HotVWs!
There is a page dedicated to the "Conga Cruise".
Thanks again to Dean Kirsten and his staff at HotVWs for the great spread! 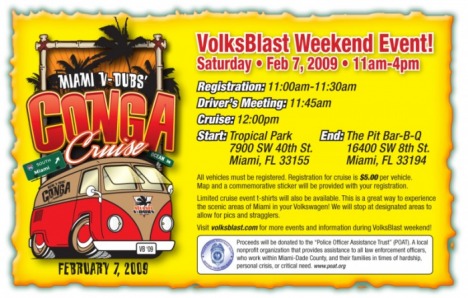 Miami V-Dubs hosted a cruise during the Volksblast weekend on Saturday. We had about 100 VWs participate and helped raise $1500 for the "Police Officers Assistance Trust" (POAT.org). We cruised the streets of Miami and ended up at The Pit Bar-B-Q joint near the Everglades. Check out the write-up in the June/09 Issue of HotVWs. For more info, click on above picture.

This was our first road trip as a club in many years. We had over 20 VWs drive up to the Bradenton/St. Pete/Tampa area for the 3 day weekend. Definitely a great time! Check out the vid below! 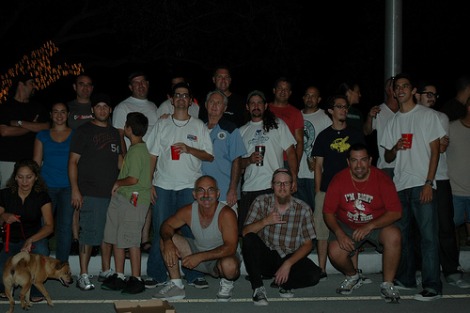 This is free show that is held every Friday of the July 4 weekend. It is an all make show-n-shine, but this year we flooded them with 30+ VWs! Always a great little show held at the Circle in Miami Springs. For more info, click on above picture. Check out the slideshow below courtesy of Spanish Flea... 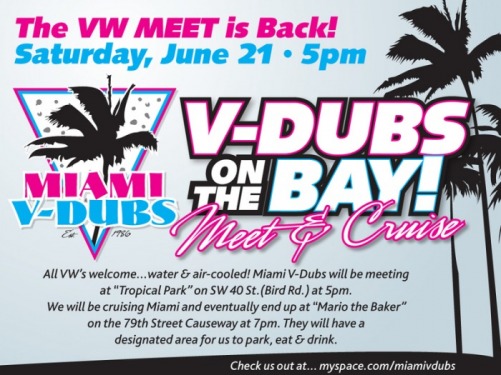 Miami V-Dubs' first event after 15 years. This was the event that formally re-introduced Miami V-Dubs back into the scene. We had a cruise through Miami and its vicinities and eventually ended up at a pizza joint on the bay in North Bay Village. We had 60+ VWs participate! For more info & pics, click on above picture. Coverage by Road Rage magazine here. 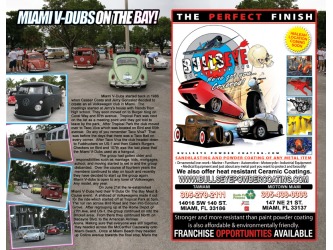 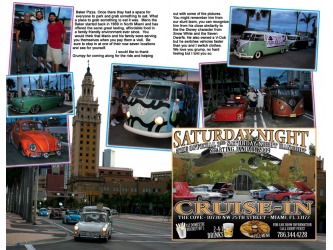 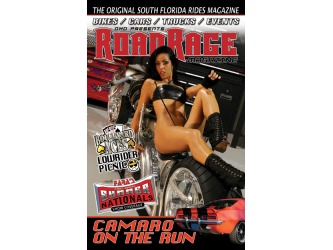